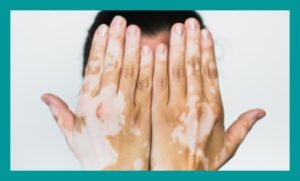 Vitiligo Treatment – What is Vitiligo? Vitiligo is a condition in which the pigment cells of the skin, melanocytes, are destroyed in certain areas, resulting in depigmented or white patches of skin in any location on the body. Vitiligo can be localised to one area or it may affect several different areas on the body. In our treatment for Vitiligo, we aim to discover all parts of your health jigsaw to get the whole picture.

Most experts believe that it is an autoimmune condition in which the body’s immune system mistakenly attacks and destroys certain cells within the body. It is not painful and does not have significant health consequences. However, the emotional and psychological impact should not be underestimated. We address this also in our vitiligo treatment London clinic.

White patches can also appear on both the mucous membranes (tissues that line the inside of the mouth and nose) and the retina (inner layer of the eye). The hair that grows on areas affected by vitiligo sometimes turns white. The cause of vitiligo is generally poorly understood with doctors and researchers have several different theories.

Who is affected by Vitiligo?

About 0.5 to 1 percent of the world’s population – that’s around 65 million people, have vitiligo. In the United States ofAmerica, 1-2 million people have the condition. Half the people who have vitiligo develop it before age 20; most develop it before they re 40. The disorder affects both sexes and all races equally; however, it is more noticeable in people with dark skin.

A number of symptomatic medical therapies, most of which are applied topically, can reduce the appearance of Vitiligo.

Topical steroid therapy: Steroid creams may be helpful in repigmenting white patches, particularly if they are applied in the initial stages of the disease. These creams can cause side effects. For this reason, patients are monitored closely for skin thinning and skin striae (streaks or lines on the skin).

Psoralen photochemotherapy or psoralen and ultraviolet A therapy (PUVA) therapy: This is probably the most effective symptomatic treatment for vitiligo available in the United States. The goal of PUVA therapy is to repigment the white patches. However, it is time-consuming and expensive, and care must be taken to avoid side effects, which can sometimes be severe. Psoralen is a drug that contains chemicals that react with ultraviolet light to cause darkening of the skin. The treatment involves taking psoralen by mouth (orally) or applying it to the skin (topically). Known side effects of oral psoralen include sunburn, nausea and vomiting, itching, abnormal hair growth, and hyperpigmentation. Oral psoralen photochemotherapy may also increase the risk of skin cancer.

Depigmentation: This treatment for vitiligo involves fading the rest of the skin on the body to match the areas that are already white. Patients apply the drug monobenzyl ether of hydroquinone (monobenzone) twice a day to pigmented areas until they match the already-depigmented areas. The major side effect of depigmentation therapy is inflammation (redness and swelling) of the skin. You may experience itching or dry skin. Depigmentation tends to be permanent and is not easily reversed. In addition, a person who undergoes depigmentation will always be extremely sensitive to sunlight.vitiligo treatment

At Harley Street IBS & Autoimmune Clinic we diagnose and treat any underlying issues, which may be fuelling the vitiligo. We do not treat just the symptoms. We formulate a treatment plan to meet each patient’s unique needs based on the results of their functional medicine tests; and natural medicine. We do not have a one size fits all approach. This holistic approach has helped many patients.

We also address the gut issues, which are sometimes associated with this condition.

Vitiligo: an update on current pharmacotherapy and future directions.