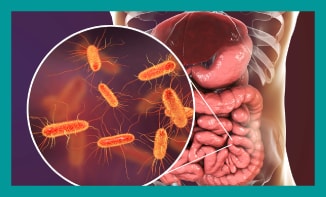 SIBO Treatment London – Guardian featured Harley Street IBS & Autoimmune Clinic has diagnosed and successfully treated many patients with SIBO. Most of them had been suffering the uncomfortable symptoms of small intestinal bacterial overgrowth for many years, without receiving a correct diagnosis. We have found that SIBO is usually a symptom of a deeper issue, which needs to be diagnosed and addressed before SIBO can be resolved.

Our patient outcomes are said to be “remarkable” by one of the UK’s leading Pathologists.

SIBO Treatment London Clinic: We usually find that our patients had previously been treated only symptomatically rather than having the underlying issues addressed. Many had been prescribed extensive antibiotic therapy in the past for various health issues and, for some, again for SIBO.

The small intestine contains an extensive immune system, which protects the intestine from disease-causing viruses, bacteria, and parasites. It’s the home-guard of the digestive system. The effects of the immune response have been experienced by anyone who has experienced gastroenteritis. The muscular activity or wave keeps the numbers of bacteria in the intestine at a low level. Mucus that is secreted into the intestine coats the intestinal lining and prevents the bacteria from touching the lining.

Nerve damage or muscular diseases can also alter the normal activity of the intestinal muscles, causing a reduction in wave intensity. Diabetes mellitus damages the nerve supply to these muscles. Scleroderma damages them directly. The effect of these diseases on the waves causes SIBO.

What are the symptoms of SIBO? Symptoms may include:

SIBO Treatment London Clinic with Natural Medicine
A full case history is taken. Before any treatment for SIBO is prescribed, the extent of the SIBO must be ascertained. Once this has been done using non-invasive diagnostic medical tests, a treatment plan is formulated, which incorporates natural medication, prescription health supplements and dietary modifications. Every patient’s experience of SIBO is different and that is why it is important to tailor the treatment for SIBO by way of a personalised prescription to meet the needs of each patient.

This approach works far better than a one-size-fits-all approach. The bacterial overgrowth is dealt with and the gut lining, which is damaged and inflamed, is repaired with natural medication, prescription health supplements and diet. Treatment for SIBO London clinic can take up to two years, depending on the severity of the overgrowth and also how well the patient adheres to the diet. However, progress is usually noted by the patient quite early on in the SIBO treatment. Many patients have recovered within six months after SIBO treatment London Clinic.

We also address any allergies that may be undermining the immune system.

If you would welcome this approach to SIBO treatment