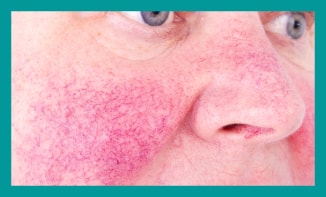 Rosacea Treatment London: Rosacea is a common skin condition. It often begins with a tendency to blush or flush more easily than other people.

The redness can slowly spread beyond the nose and cheeks to the forehead and chin. Even the ears, chest, and back can be red all the time.

Rosacea can cause more than redness. There are so many signs and symptoms that rosacea has four subtypes:

Scientists are still trying to find out what causes rosacea. By studying rosacea, scientists have found some important clues:

According to the orthodox medical community, the cause of rosacea is unknown and there is no cure for the condition. In contrast, functional/holistic practitioners take the skin symptoms into account, but also use them as signals to uncover deeper issues going on beneath the surface.

As with most health conditions, there are multiple underlying factors in rosacea rather than just one cause. Functional medicine tests will be used to understand the root causes of the skin issues. Then a tailored plan will be created utilising natural medicine in order to address the root issues and allow the skin to heal. Treatment for rosacea is based on the test results in order to meet each patient’s  unique needs. We do not have a one size fits all approach.